A guide to total wealth

Surjeet Mastwal Posted on May 26, 2016 Posted in Total Wealth No Comments 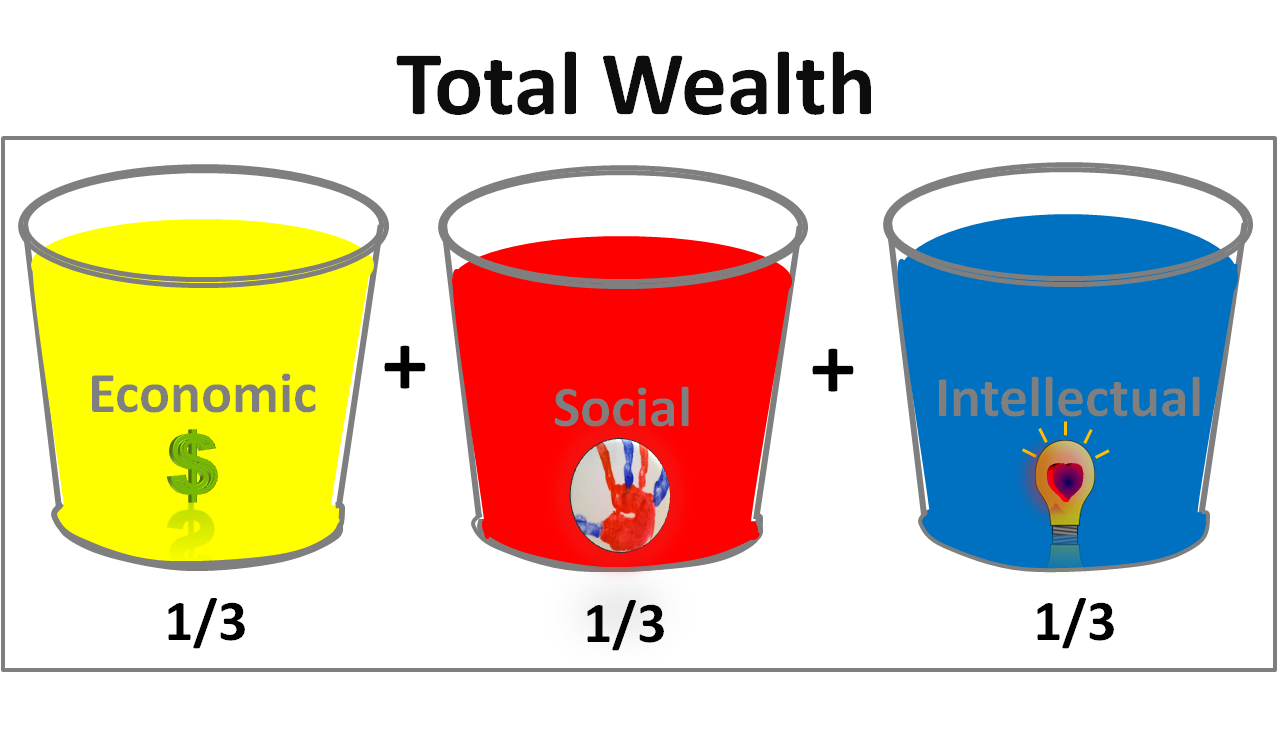 The initial step in the path towards complete wealth is to understand that wealth is a combination of three main independent parts: economic wealth, social wealth, and  intellectual wealth. These parts are a little bit like the three primary colors: yellow, red, and blue, which are needed to make all of the other colors. Similarly, you need all three parts of wealth to have a rich and colorful life. So to actually be wealthy, all three parts of wealth are necessary.

The three parts of wealth can be thought of as three buckets that are filled with different things. Each of them is only one third of total wealth. Once you get close to filling one, you cannot fill it any further and so putting more effort into that will not really increase your total wealth any further. Total wealth can then only be increased by actions that add to the other two buckets. Each of the three buckets is filled by doing different types of actions.

These different actions fill the respective buckets, but also within each of these categories, actions such as monetary debts, negative social connections, and actions that are forced versus desired subtract from the buckets.

The second step is to take stock of your own buckets. Examine how much wealth you currently have in each of the buckets by getting the net value of each. Net economic wealth is economic assets and income subtracted by monetary debts. Net social wealth is the total number and value of positive social connections subtracted by total number and value of negative social connections. Net intellectual wealth is the total number of hobbies, passions, and dreams that you have developed subtracted by the number of activities that you do that you don’t like to do. Doing this gives you an idea of how much relative wealth is in each of the buckets. You can do this qualitatively to get a general idea or you can use these wealth calculators for a more standardized semi quantitative method. Economic Wealth Calculator, Social Wealth Calculator, Intellectual Wealth Calculator.

The third step is to adjust actions based on the wealth examination. Time is the common resource that everyone has to increase each of the parts of wealth. So the amount of time spent doing actions that increase the different parts is what can be adjusted. If one bucket is high but others are very low, then actions can be shifted towards those that would lead to increases in the other buckets. Adding to any bucket increases actual total wealth, so adding to the bucket that is easiest to add to is the most efficient. If one bucket is close to being full then it may be fruitless to continue taking actions to increase that one at the expense of actions that would increase others. Taking actions that add to the other buckets would be more productive for increasing actual total wealth.

The final step is the repetition of the first three steps every once in a while to reshape life and readjust actions to continue in the path towards increasing total wealth.

In summary, it is important to realize that the common reserve to increase wealth is the time you have to take actions in life. Some of this time is used to increase wealth. Wealth can then be spent as neefed to fulfill necessities in life. In addition, an individual’s stage in life may also influence how time is distributed among the three parts.  But regardless of the stage, the key is still to examine the imbalances and take actions to rebalance those. This will insure that fruitful actions that are actually leading to wealth addition are increased and fruitless actions are reduced, so that there is continual progress in the journey towards complete wealth, which then allows for a rich and colorful life.

So, how does this view of wealth compare with your own? Please leave comments below.